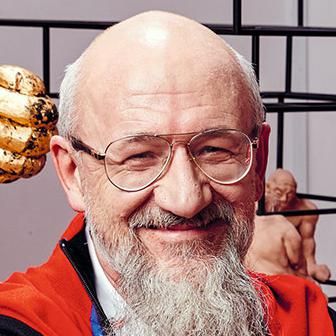 Born in 1961, in Kiev. Graduate of the Kiev Art School and Geological Survey Technical College. He became an artist in the 1980s. At first, he tried himself as a sculptor. He moved to Moscow. At the beginning of the 1990s, he became known as one of the first performance artists of Russia. The Reservoir Dog Performance at the Kunsthaus Museum (Zurich, 1994) became the turning point of Kulik’s career and is a milestone in the history of contemporary art. Oleg Kulik works in different genres: photography, video, sculpture, installations, painting. He held more than 20 solo exhibitions and participated in more than 50 group projects, including the Venice, Istanbul and São Paulo Biennales, exhibitions at Tate Modern (London), S.M.A.K (Ghent), the Austrian Museum for Applied Arts (МAK) in Vienna and many others. Oleg Kulik is also recognized as an art curator; here are some of his projects: I am a Believer! at the Winzavod Moscow Contemporary Art Center during the second Moscow Biennale of Contemporary Art (2007), the Arkhstoyanie Land Art Festival (2010), the Trees Blossom Even Under Ice North Korean Art Exhibition (2010) at the Winzavod Moscow Contemporary Art Center. A film about Kulik – Oleg Kulik: Challenge and Provocation directed by Evgeny Mitta – was released in 2009. Later a theater show Oleg Kulik: Playing the Drums was presented as part of the Chelovek.doc Project at the Praktika Theater. Both the film and the play will be shown at the GUM-Red-Line Festival.