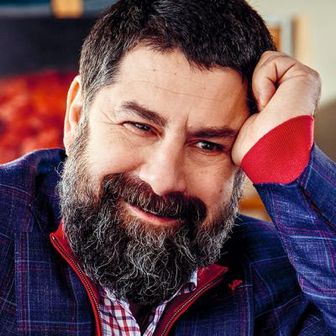 Born in 1967 in Tbilisi into a family of artists – Nana Kutateladze and Georgy Totibadze. Graduate of the Moscow Art School in Memory of 1905 and the Tbilisi Academy of Arts named after his grandfather – Apollon Kutateladze. Lived and worked in Paris in 1993-1994. In 1996 he worked in Hong Kong, and from 1997 until 1998 – in San Francisco. Totibadze’s work is noted for its philosophical aloofness, deep colors, and a desire to show the world in a new light, for example, from up high. His paintings have been presented at numerous exhibitions around the globe: Moscow, New York, Paris, the State Museum of Oriental Art (1996), the Moscow Contemporary Art Museum (2012), the Moscow Contemporary Art Biennale. Artworks by Totibadze can be found at the Moscow Contemporary Art Museum and at the State Museum of Oriental Art. Since 2007, the painter works at the Strelka Institute of Architecture and Design.