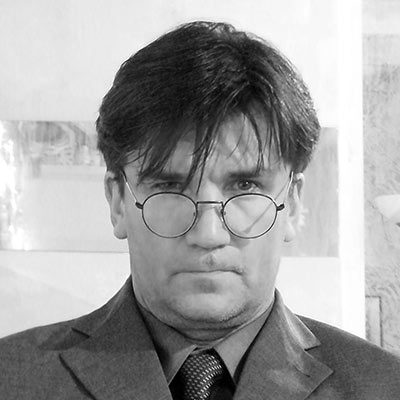 At the end of the 1980s, Franz Rodwalt became acquainted with leaders of the Leningrad underground. He begins creating bandage sculptures that are presented as part of performance art pieces and international artist performances. He organizes German artist exhibitions in Leningrad. In 1989, Rodwalt and Inal Savchenkov are invited to work in Italy. Later they establish the joint group Zero to the Four Winds in Budapest and organize an exhibition at the Tacheles Gallery in Berlin. In the summer of the same year, Inal Savchenkov and Franz Rodwalt decided to establish the international “School of Art Engineers” at their studio. The method employed by the “engineers” is known as “Saint Petersburg post-realism” and focuses on searching for a universal artistic language through the aesthetic analysis of the outside world: art tools are used to recognize and process scientific and technological discoveries, as well as to do research related to the humanities, philosophy, and medicine. Thus, people of various fields and professions can potentially be united through this form of analysis in the horizontal structure of the “School of Art Engineers”: philosophers and doctors of medicine, designers and excavator operators, engineers, and artists. The universal language developed by the School perceives an artwork as an object of inherent value that exists inside history. Time is the co-author of the artist who can return to finished artworks at any time. The artworks have become replicable — a key principle of engineering in the last 150 years.

In 1995, Franz Rodwalt moves to Berlin. In 1999, he begins working actively as a sculptor and artist in the field of cinema. He creates sculptures, paintings, collages, videos, and animation. In 2006, Rodwalt creates together with Terry Gilliam the sculpture installation “Past People” at Potsdamer Platz in Berlin. Since 1999, Franz Rodwalt worked with many of the most famous film directors: Quentin Tarantino (Inglourious Basterds), the Wachowskis (V for Vendetta, Speed Racer, Cloud Atlas, The Matrix: Resurrections), Wes Anderson (The Grand Budapest Hotel), George Clooney (The Monuments Men), Roman Polanski (The Ghost Writer), Chad Stahelski (John Wick: Chapter 3 – Parabellum), Duncan Jones (Mute), Paul W. S. Anderson (The Three Musketeers), Fede Álvarez (The Girl in the Spider's Web), Karyn Kusama (Æon Flux), Gore Verbinski (A Cure for Wellness), Christian Alvart (Pandorum), Tommy Wirkola (Hansel & Gretel: Witch Hunters), and many other luminaries. Rodwalt created sculptures for the production of “Peer Gynt” at the Staatstheater Hannover, pieces for the Bremen Airport, as well as the Street Art Museum and Freies Museum in Berlin.