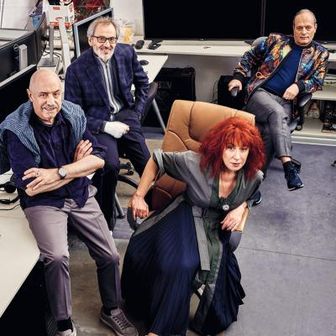 The АES+F was established in 1987. The art group’s members include painters Tatiana Arzamasova, Lev Evzovich, Evgeny Svyatsky, and photographer Vladimir Fridkes who joined the group in 1995. The group name is derived from the initials of its participants. The AES+F has been exhibiting their projects worldwide since the end of the 1990s. The group achieved worldwide recognition and acclaim after their Last Riot multi-channel video installations project at the 2007 Venice Biennale. The group is experimenting with different types of media – from photographs to digital collages and paintings, sculptures, multimedia total installations. All artworks by AES+F are marked by their visual appeal, multiple layers of meanings and elaborate technological design. The group’s art show exhibiting the Liminal Space Trilogy premiered to long queues of visitors at the 4th Moscow Biennale. In 2015, the АES+F Group was awarded the prestigious Pino Pascali Award for Allegoria Sacra. The Inverso Mundus Project was presented the same year in Venice. In 2017-2019 AES+F showcased this project at the Kochi-Muziris Biennale in India, as well as the Bangkok Art Biennale, and numerous exhibitions in Europe, Australia, and the USA. The AES+F Group provided a large-scale artwork for Puccini’s Turandot at the Teatro Massimo of Palermo in January 2019.