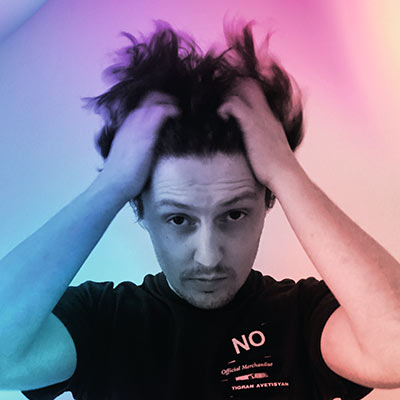 Tigran Avetisyan was born in 1988 in Saint Petersburg, graduated from the Central Saint Martins College of Art and Design in London. He presented his first clothes collection in 2013. His art has always been based on used materials, customization, and deconstruction of ready-made items. Avetisyan’s collections are notable for the graffiti-inspired writing and splashes of paint that seem to remind one of work clothes. Tigran is also well-known for his performances dealing with clothes customization. During his career, Tigran Avetisyan created collaborations with such brands as Nike and Comme de Garçons. As a clothes designer, Avetisyan reveals a multidisciplinary approach and an ability to work on the threshold between art and fashion. As the designer notes, “today fashion is the easiest way to say something and be heard.”

The work by Tigran Avetisyan was first presented as a performance in July 2019 at Pitti Uomo – the largest expo of male clothes held twice a year in Florence. Four white cotton capes attached to a white canvas formed the background for the “It’s too late for this message” slogan. The performance was titled “This slogan has no message”. Avetisyan believes that fashion is the ideal form of expression for the generation of people with low ability to concentrate, as fashion attracts and provokes them. Still, the message could possibly come too late, and the attention given to it too fleeting to make any lasting change.