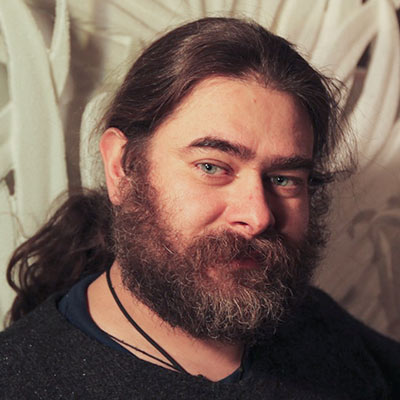 Born in 1972 in Novorossiysk. In 1988, moved to Leningrad to join his friend Sergey Yenkov. At that time Grigory, a young musician, improvised on the trumpet and the harmonica. However, as noted by Inal Savchenkov, “Grigory’s friends from the art group ‘Good Wizards’, acting in good faith, hid away the trumpet and, using the method of gravitational effect, deconstructed the harmonica. In these conditions, the phenomenon of Strelnikov was naturally launched as part of a new creative process.” From that moment on, Strelnikov works in painting.

In 1989, Grigory Strelnikov joins the newly established School of Art Engineers, works in painting and collage, actively participates in the association’s exhibitions and projects. The expressionist artistic style of Strelnikov, as recognized by the “Engineers,” is the most improvisational among all the members of the group. Strelnikov’s mastery of collage had a significant impact on animation projects produced by the “Engineers.”