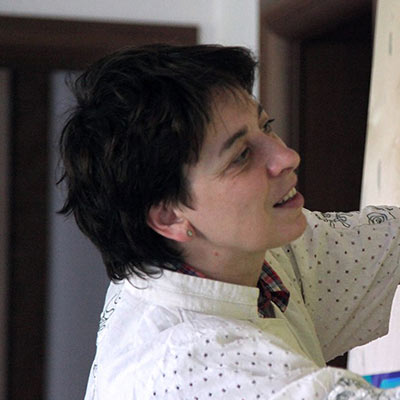 Born in 1968 in Moscow. Graduated from the Moscow Institute of Architecture (1993) and the Institute of Contemporary Art (2000). In the mid-1990s Natalia Struchkova was one of the pioneers of web design in Russia, she also worked in 3D graphics. The first art pieces by Struchkova were, in fact, mostly digital and connected to 3D modeling. The artist participated in projects related to web art, where the Internet was not just a virtual action space but a mode of expression. Since 2001 Natalia Struchkova began painting. She transforms digital technologies from a tool of art into its subject matter. By studying the problem of information dependency due to daily consumption of media images, the artist creates a series of paintings replicating the primitive early digital graphics. Digital images are presented by Natalia Struchkova as a complete reboot of our perception of the real world around us. The artist states that modern humanity depends more and more on the simulacrum of social media in experiencing reality. The digitally encoded images gain dominance over its analog depictions in the enormous volume of visual information. As a professional designer, Natalia Struchkova had to learn the digital language to create images. As an artist, however, she recreates real life itself, reformatted and generalized. Her paintings display pixels as symbols of a certain comprehensive system. Other universal symbols are LEGO blocks, which replace pieces of reality in the artist’s work. The art of Natalia Struchkova is epitomized by generalized map collections that show the diversity of media images that fill our daily lives. Her paintings become a form of protest against the changing world where reality itself is formed via modern technologies. 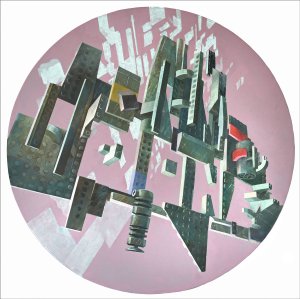