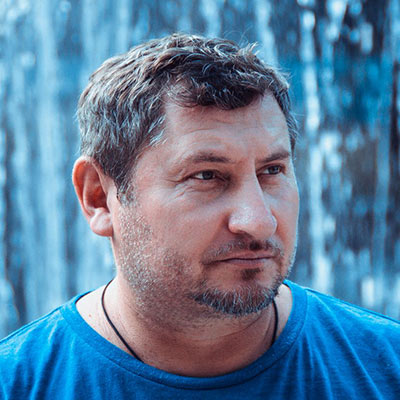 Born in 1966 in Novorossiysk. In 1982 moved to Saint Petersburg. In 1983-1989 was a part of the New Artists group — an iconic creative association of nonconformists that was established by the icon of the Leningrad New Wave Timur Novikov. Together with the New Artists, Inal Savchenkov searched for new opportunities for avant-garde art in the USSR of the 1980s. This formally resulted in the movement returning to the language of primitivism and neoexpressionism. Inal Savchenkov participated in art synthesis projects, as well as the performances of Sergey Kurekhin’s Pop Mechanika Orchestra. The artists created animation and videos for the Kino rock group, New Composers, Hummingbird, Two Planes music bands. In 1987 together with sculptor Franz Rotwald and the artist’s brother Sergey Yen'kov he established the Fine Arts Engineers group that presented a new method of creating by using scientific data in artworks. At the end of the 1980s, Inal Savchenkov created the North Pole Society with a focus on producing films and animation. The artist attaches great importance to the concept of his work. He strives to bring art into practical contact with society. The artist uses painting to express various physical and emotional conditions that form in the course of gaining empirical knowledge of reality.